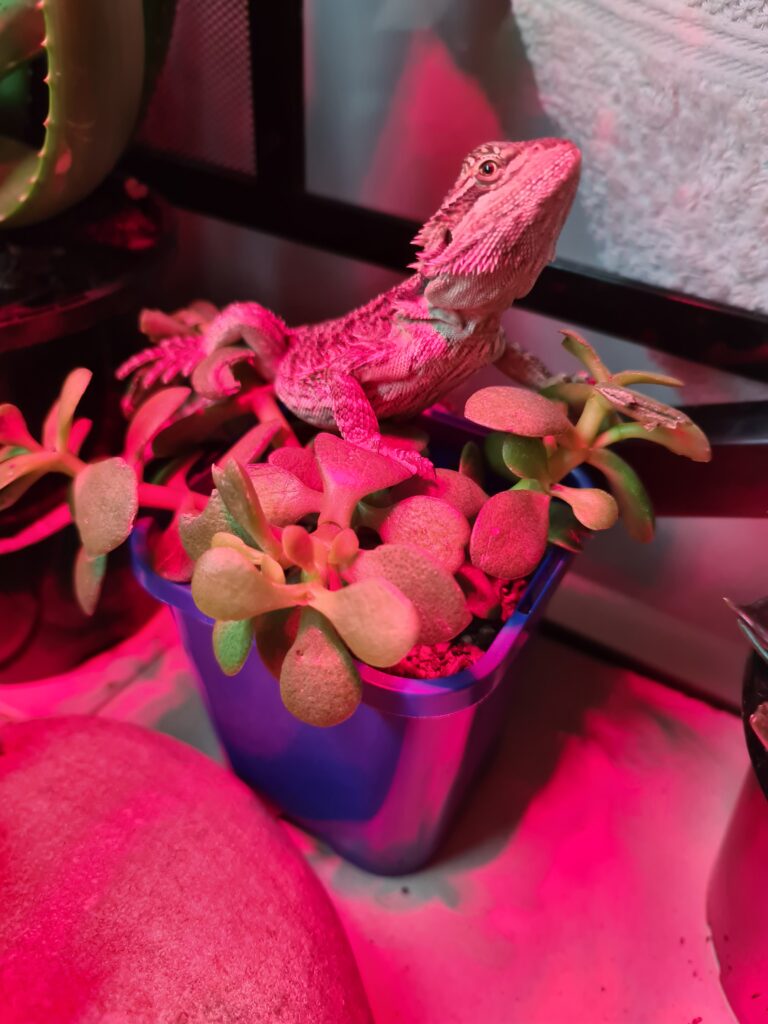 I bought a new plant for Jeff’s house the other day.. It’s an Haworthia (I think).. Whatever.. Jeff LOVES it.. sits in it for hours and hours 😉 And has a bit of a nibble on it too! The Red tint is from his heatlamp, btw…… Click Here to Read More 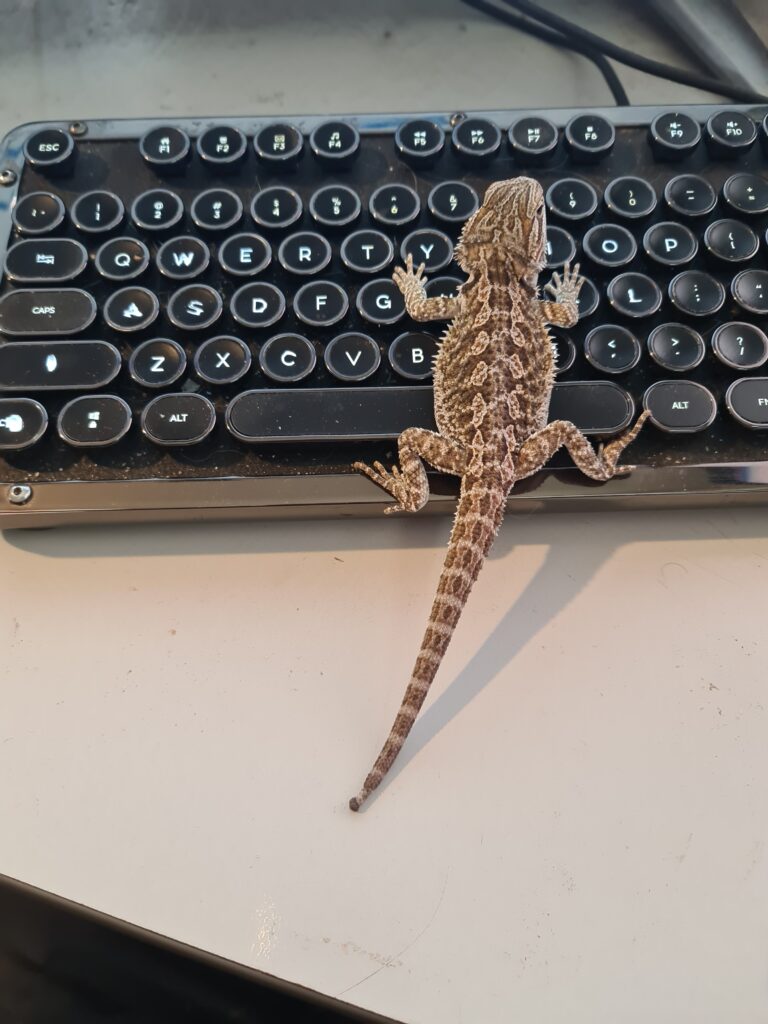 Dani mentioned in passing one day that she had been into a Garden Centre/Pet store (Olivers) and they had a very friendly and cool Bearded Dragon sitting on the counter.
I happened to be driving past Olivers a couple of days later, and thought I’d pop in for a looksee, as I’ve always had a bit of a fascination with Reptiles, but had never taken the time to really check them out.

Sadly, the adult Beardie had moved on the day before, but they had a whole tank full of Babies – and were they cute? Oh yeah!

So, not content with two needy Golden Retrievers to occupy my time I left Olivers (Really nice people BTW) with a shiny new Reptile tank!… Click Here to Read More

The day was a bit dismal, but the Hot Rods were Brilliant, as usual! I was testing a new 35mm lens, I think the pictures came out OK!… Click Here to Read More

I’m sure that anyone who has followed Motor Racing for a while has heard of the Legendary Brooklands, the world’s first purpose-built ‘banked’ motor racing circuit, and also one of Britain’s first airfields. Brooklands has an amazing history, housing Britain’s largest aircraft manufacturers in the early 1900’s, providing invaluable support through the second World War, and producing aircraft up until the 1970’s Opened for Motor Racing in 1907, the track was the centre of British Motor Sport until 1939, when the last race was run. The complex is still open today, however, hosting Museums for British Motorsport and Aviation – even a great collection of London Buses and a Concorde! When the opportunity arose to spend a half day at Brooklands, you can bet I was excited! … Click Here to Read More

It’s been AGES since I posted anything here – life has been a bit hectic! Since my last post I’ve acquired a 3D Printer, and thought I’d share with you my first customised project. I’ve had a CCTV Board sitting on a cardboard eggbox for a couple years nows, as I wasn’t able to source a suitable case for it. Enter 3D Printer – problem solved! See the pictures at the bottom of the post. Anyway, the printer… I chose an AnyCubic Chiron, which has some pretty impressive specs – the Bed is 400x400mm, and it can print to a height of 450mm. It took me a few days to figure it all out – not assisted by some faulty original components, which I bypassed by pressing a Raspberry Pi into service loaded with the brilliant OctoPrint software.… Click Here to Read More 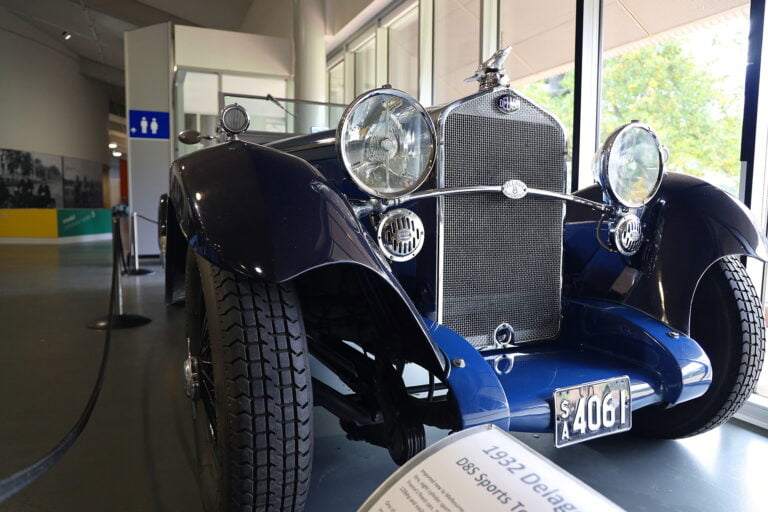 I had to pop up to the National Motor Museum to do a little maintenance on a vehicle there, so of course I took my camera and had a look around to see what was new! Pictures are HERE… Click Here to Read More 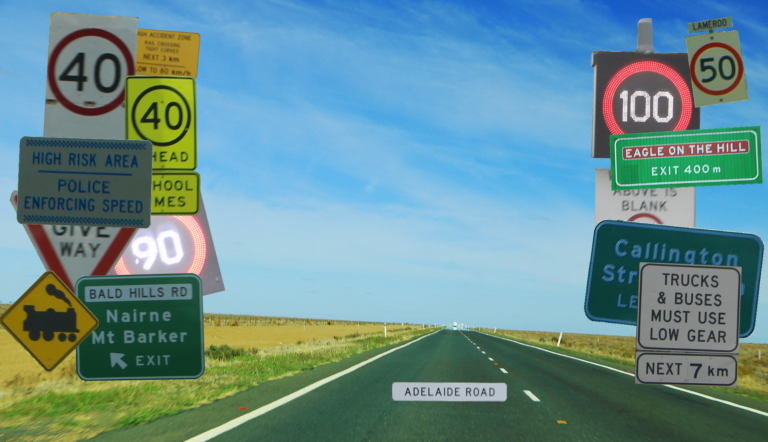 This road trip that I’m going to share with you came about as a result of an accidental internet find.

I was looking through some websites of Australian Car Museums and noticed that one I particularly wanted to visit (sometime) was going to close down in a few months!

Lost in the 50’s would be lost FOREVER! I had to photograph it!

The Lost in the 50’s Museum 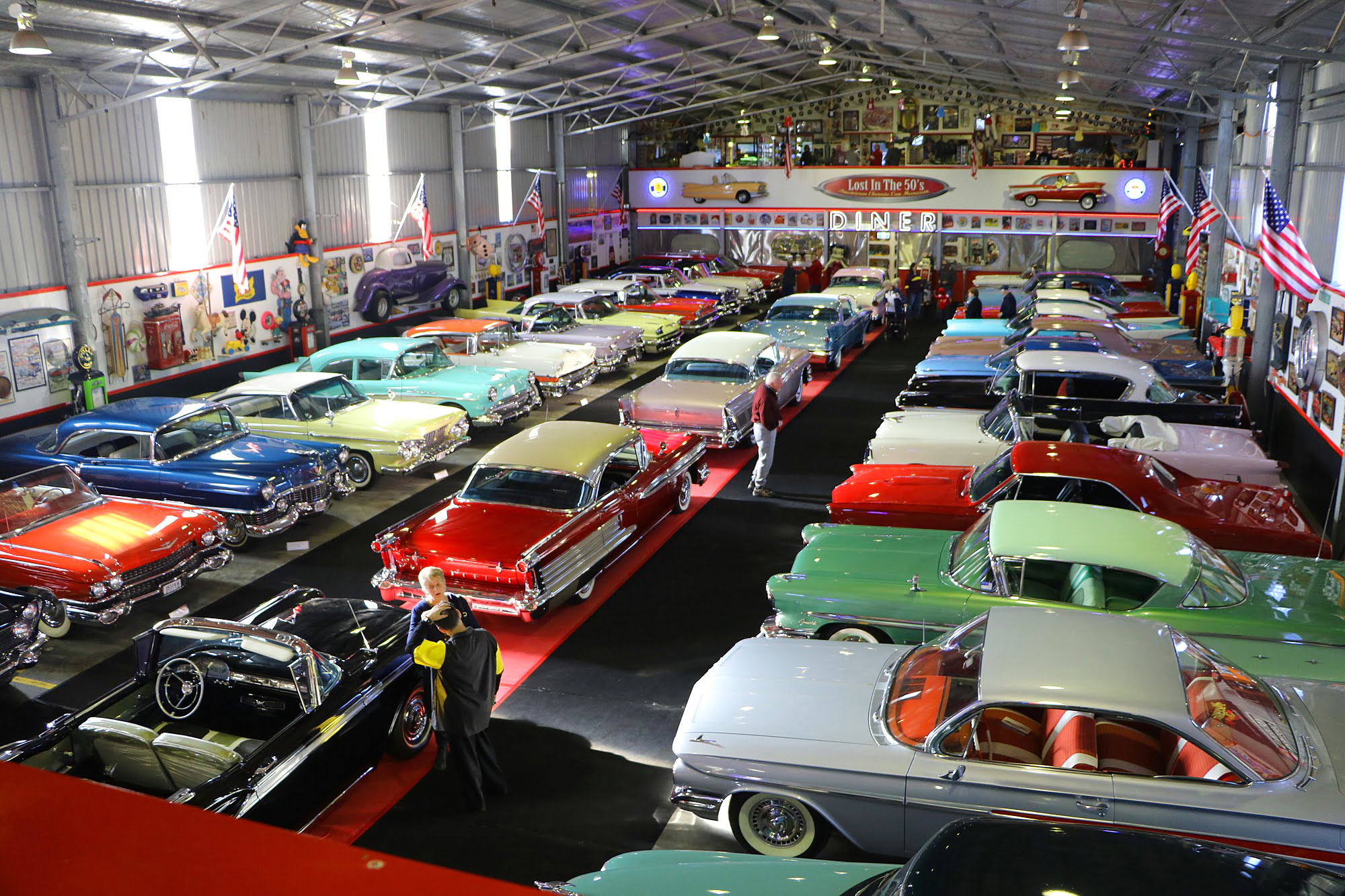 So I started thinking seriously about it, initially getting in touch with the museum owner (Glen) to ask if he’d mind me coming in and taking a bunch of photographs. He didn’t mind in the least – so it’s on!

Initially I considered flying to the museum, which is situated about 1500 kilometers from my home in Adelaide, South Australia.… Click Here to Read More 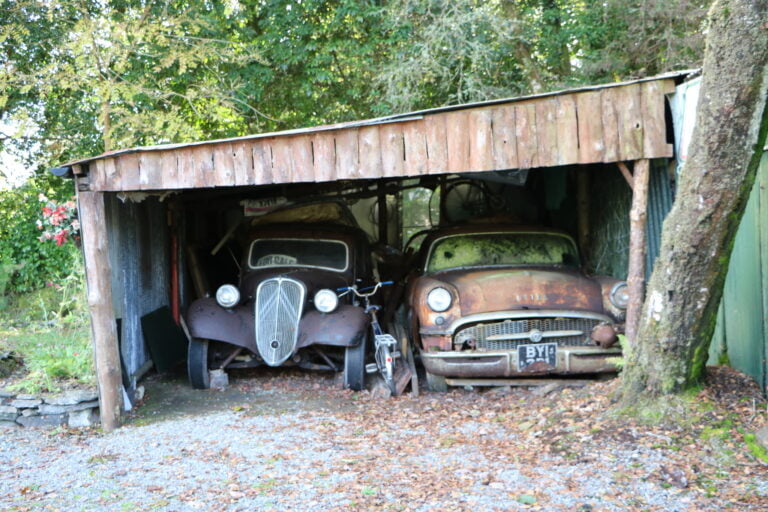 Before you enter the sheds that house the museum, there are some very pretty gardens, and bits and pieces strewn around. Like this! So, I started walking around, and the first car I saw was this brand spanking new Porsche 911GT3!! What? It’s not a GT3? Sorry.. they all look the same to me.. Niiice! Ye Olde English Triumph Stag! I’ve never seen one of these before, a German Adler. This Rolls-Royce Corniche (in a MOST unusual colour!) was the result of a ground-up restoration by the Museum. A very nice Model T Ford! And a beautiful Gold Riley. Here’s a nice old Rover! This Hillman Special was most likely something in it’s day! And a STUNNING Rolls-Royce Phantom. And her Flying Lady emblem.
… Click Here to Read More 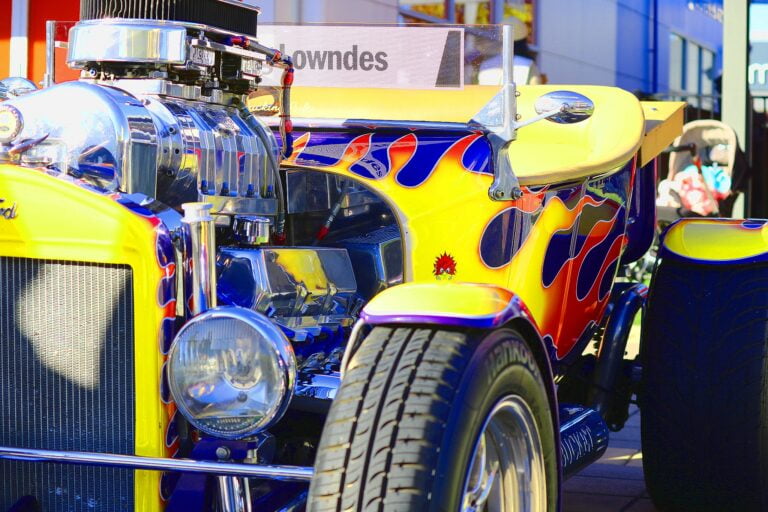 It was very busy, people everywhere, and the cars were parked right on top of each other, so it was hard to get decent shots. Here’s a 59 Caddy to start with – LOVE those fins! More Cadillac Finny Goodness! A 1960.. A Nice Z28 Camaro And a really nice 1955 Chev 1973 Chev Corvette I don’t think they made 356’s in RHD, possibly a replica.. but nice, nonetheless. Extremely sweet Engine Bay of a Camaro SS. Very pretty 1929 Ford Hot Rod I am about as far from being a Ford Fan as is possible, but I really liked this Falcon 2-Door GT.. Hawt!! Pimpin’ Chrysler Convertible! A bit out of place was this Ferrari 430. Most unusual had to be this Ford Falcon Hearse conversion.
… Click Here to Read More 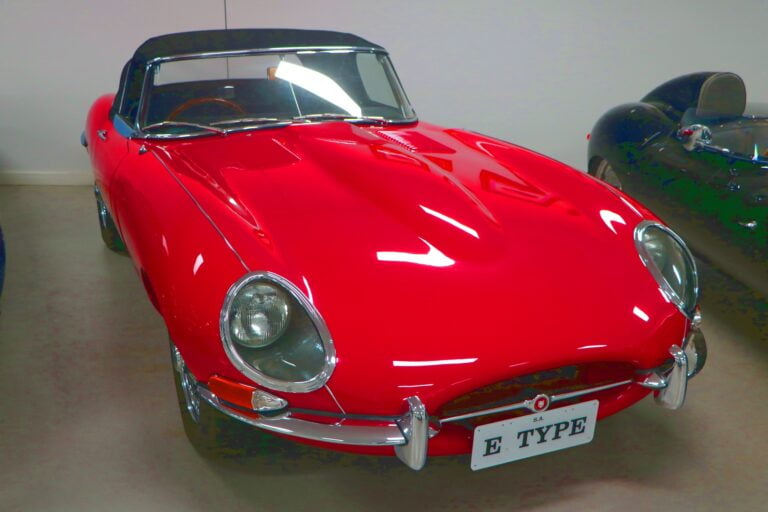 Google took us to the spot, but the outside of the building showed little indication of the rumoured treasures within… Apart from that XK maybe? This is a pretty good indicator that we’ve found the right place! What an amazing piece of art! In we go, and are immediately offered a coffee by the young Lady (Karen) who was (wo)manning the fort! How hospitable! Karen showed us where we would find everything, and left us to look around and take some pictures. This 1932 SS1 was the very first Jaguar bought (by accident!) by Carl, and has pride of place immediately inside the door. This car started it all! The ’32 is very original and in amazing condition for a car that was used – daily – for many years.
… Click Here to Read More 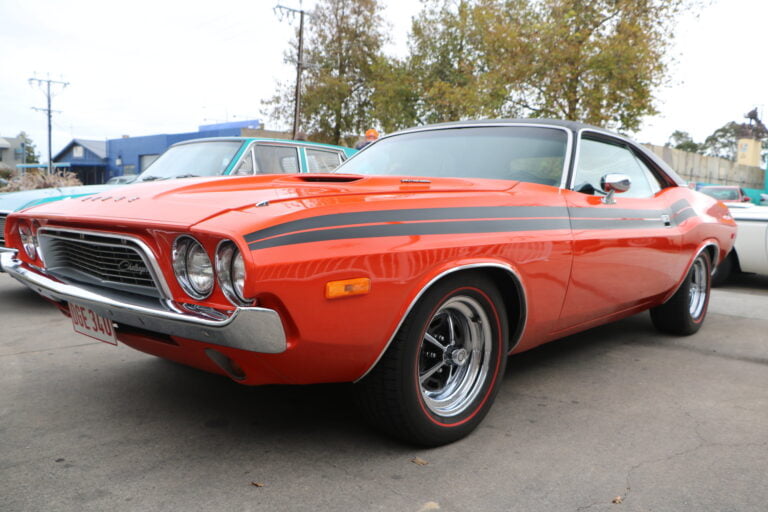 As the cruise participants milled around I wandered in and out taking pictures of their cars, starting with this VERY nice Dodge Challenger! And here’s another shot of the Challenger – Too nice! Next was another Dodge, a Charger. And another shot. It looks just as good from this angle! Nice bum, Charger! Not sure if they had these Ford Fairlanes in the USA, but we sure got them here in Australia. There are still a few of these being raced in Historics – the famous Ford Galaxie 500! These Ford LTD’s were sold in Australia too, I think. MASSIVE car.. THis one is DEFINITELY Australian – a Holden Kingswood! Love those wheels, they really suit. I really liked this Plymouth RoadRunner too..
… Click Here to Read More 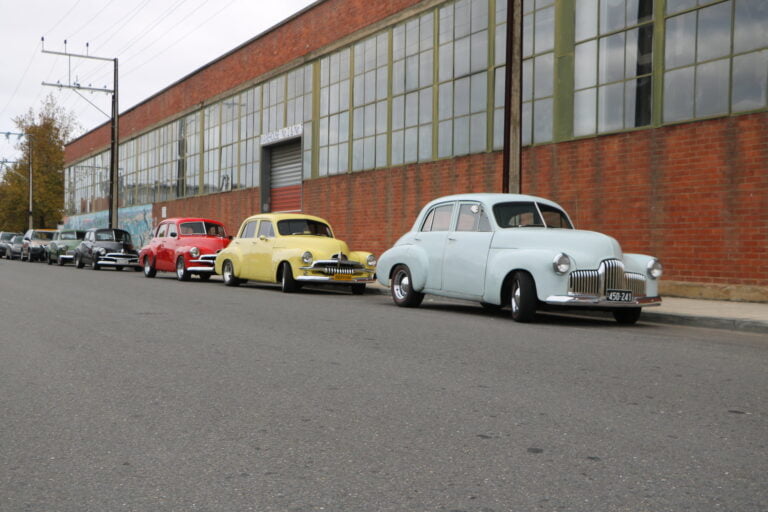 There is also a very famous institution here in Adelaide called Vili’s Cafe de Wheels, where you can buy (and consume) really great meat pies and other food. This morning I went out for a coffee at Vili’s with my buddy Steve, and co-incidentally just after I arrived people started turning up in the very first model Holdens, the 48-215 (or FX) and it’s successor, the FJ. I had my DLSR in the car, so took advantage and some pictures, a few of which I have here for you today! First to arrive was this very original (apart from the paint, I think) 48-215. I had a quick chat with the owners, and the engine is the original 132cubic inch (about 2 litre) in-line 6.
… Click Here to Read More 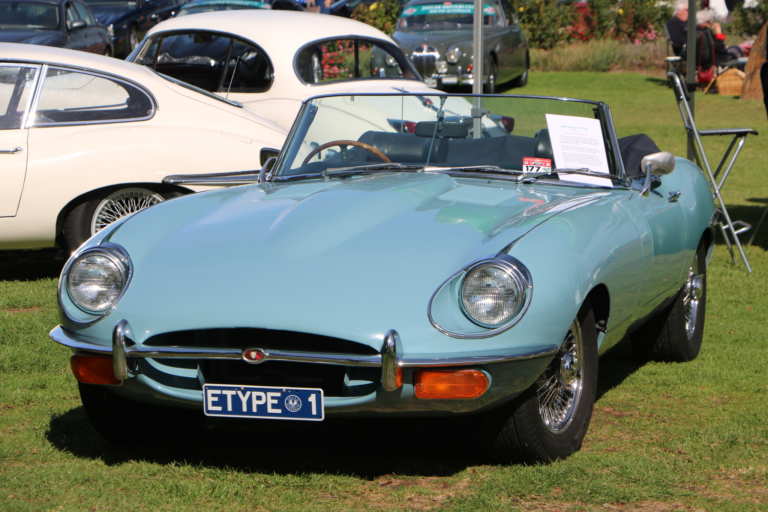 The Tour was set up with a Start/Finish Line for the leisurely drive around the picturesque Fleurieu Peninsula. No breakdowns were reported. And when the Tour finished the cars were parked on the Victor Harbour Oval for display. This is when I arrived, to take some pictures! First up were some stylish Mark 2 Jaaaaaaaaaags, like this one. The colour really suited it, I thought. And White always looks great, of course. This is another Mark2 Jag. Moving right along, here is a very nice XJ6. These never seem to look old. do they? Timeless styling. Not QUITE so sure how I feel about this one.. Different?? 🙂 Very well presented though. A very nice XJ-R.. I really like these, the ultimate XJ… And a gorgeous XK-R..
… Click Here to Read More 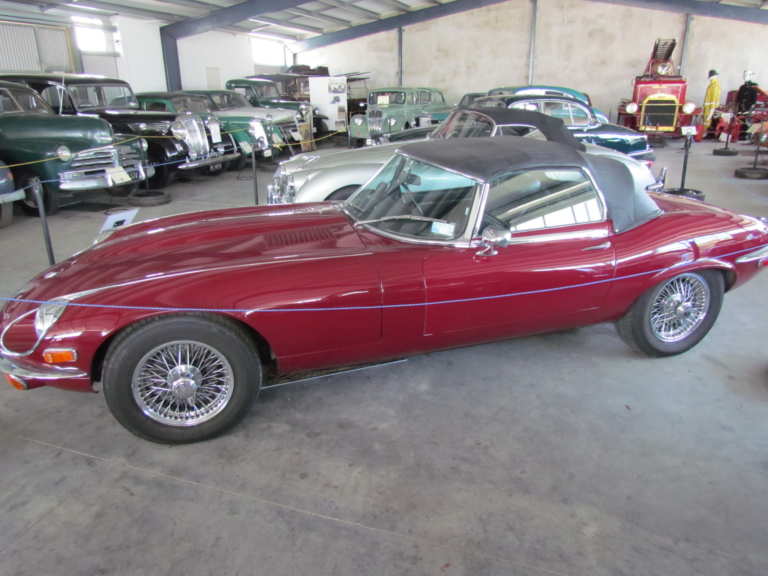 The Geraldine Motor Museum didn’t look like too much from the outside, but we had a couple of hours to spare, and the entry fee was very reasonable….so.. in we go! First impressions : The museum is crowded, and definitely built and run on a budget. But there are some nice old cars here, and there are no pretensions or salesmanship at all. This 1912 Overland looks very nice in Yellow. This 1910 Bianchi must have have been quite the thing when it was new. Lot’s of Horse Carriage influence here still. And look at the lovely polished chest on the back! And the gold-plated door handles. I bet this cost a small fortune back in 1910. This Rolls-Royce really took my fancy, to the point I tried to buy it.
… Click Here to Read More 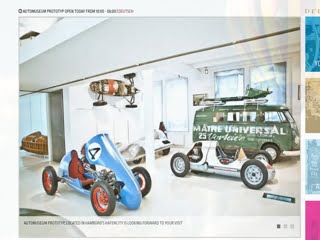 In my quest to visit and photograph every Car Museum IN THE WORLD I thought I’d better find out where they all are. In my over-achieving style I have starting building a database of museums, sorted by country/region. Early days yet, I’ve hardly touched the USA for instance, but you can find the list at This Spot. If you know of any I’ve missed, please let me know as I’d love to keep building the list.… Click Here to Read More

On a trip to the U.K. in 2017, I planned out a couple of Car Museums to visit along the way. As we were passing through the Lakes District, Lakeland’s was an obvious choice for a stop.
… Click Here to Read More 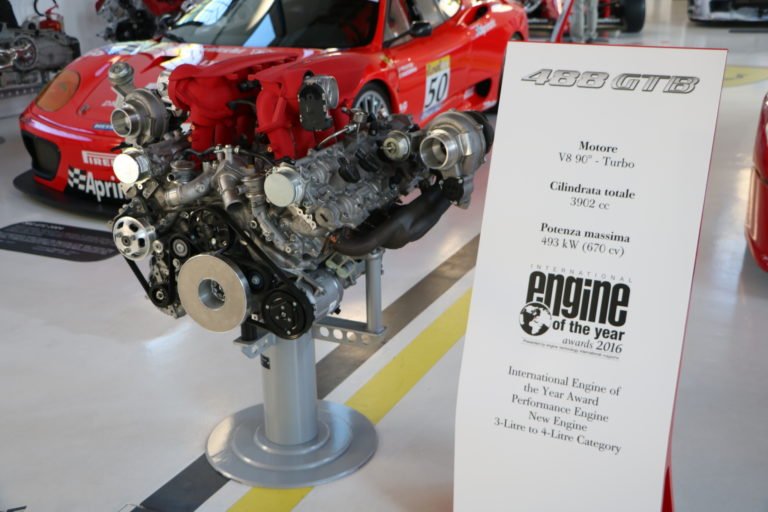 This is a companion article to a previous one I wrote, where I visited the Ferrari Enzo Museum in Modena, Italy. In that article, I mentioned that I’d taken pictures in the Engine Hall. I kept them out of that piece because I figured most people wouldn’t be overly impressed by an engine sitting on a stand. For those brave few who ARE interested, here we go! The other article is HERE if you haven’t seen it already.
… Click Here to Read More 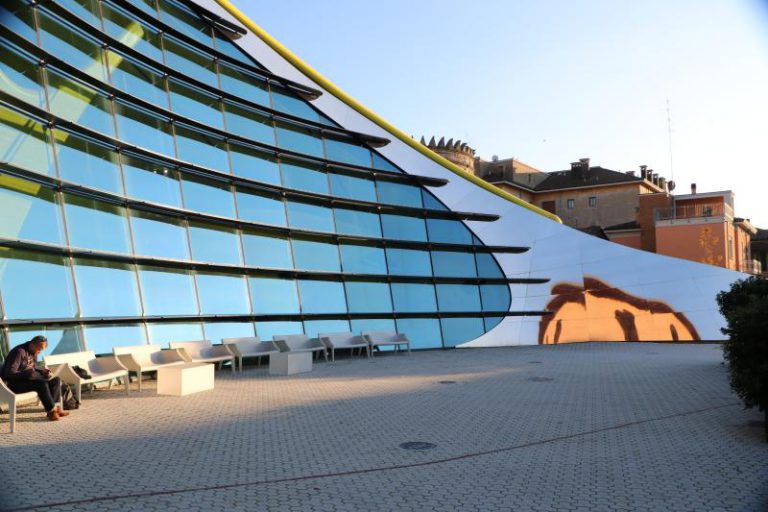 Above is the stunning entrance to the Enzo Museum. You park around the back of the building (lots of spaces!) and walk around the side to be greeted by this! I’ve never seen a museum that looked so interesting from the outside.
… Click Here to Read More

A couple of months ago I started spending a bit of time on Drivetribe.com, which is the website owned by Jeremy Clarkson, Richard Hammond and James May – formerly of Top Gear fame, and the hosts of The Grand Tour. As well as finding the moderators and (most) users extremely welcoming and hospitable I have really been enjoying my interaction with the site, to the point I have started writing some articles based on my visits to car museums and local (South Australian) events. I’ll most likely start to reproduce and expand upon the theme here, but if you’d like to view my work, go join up to Drivetribe. It is a very different site from what you are used to, as it is very social media like, but without the inane and mindless drivel that is the norm on other sites.… Click Here to Read More
Loading Comments...